A common tidbit in urban planning conversations is that absent unusual factors, the average commute time has hovered around 22 minutes for hundreds or thousands of years, even as transportation has drastically changed. To some extent, this placed an outer limit on how large cities could be before cars and rail became available. As those forms of transit developed in the early 20th century, the fact that trains could normally travel at equal or higher speeds (especially once signals and other road crossings were taken into account) led to the rapid proliferation of streetcars and other rail transit options.

The development that flipped the script in favor of the car was the freeway. Once Robert Moses completed the first limited-access parkway in 1935, it was only a matter of time (and funding, through the Federal Aid Highway Act of 1956) before they proliferated. 22 minutes soon meant that locations even 20 miles from the urban core was potentially fair game, at least before accounting for induced traffic.

Some roads built as bypasses quickly got swallowed up by suburban sprawl, such as the 44-mile beltway portion of Route 128 around Boston, already near full capacity by the time it was completed in the 1960s. Many planners had the same response as Massachusetts did: They thought bigger. The result there was I-495, a 121-mile beltway that connected and engulfed satellite cities and nearly touches both New Hampshire and Rhode Island.

Many of these isolated roads were a calculation that traffic snarling city centers was partially due to long-haul travelers running through the city, traffic that could easily take an alternate route if one were available. But by building roads through isolated locations, a very different set of incentives formed for urban residents (and homebuilders). Arguably, these outer freeways are the purest inducers of demand in the city planning context; compared to a freeway widening, they tend to more directly open up sparsely populated areas to runaway development. Let’s consider Columbus, Ohio, and I-270, its beltway.

I-270 is a 55-mile beltway completed in sections between 1967 and 1975, with the vast majority of the loop opening in 1970 and 1971. Notably, the beltway extends much further north from downtown than it does in any other direction, with its northwestern interchange with US-33/OH-161 over 15 miles from the city center (as compared to 5-7 miles for the southern two-thirds of the beltway).

There are plenty of reasons for this, including that development was already creeping northward from the city center, but that creep actually exacerbated the problem. The original proposed alignment of I-270 in the 1950s and 1960s, roughly at the level of Morse and Bethel Roads in northern Columbus, was protested due to its plan to displace the Ohio School for the Deaf and portions of the brand-new Graceland Shopping Center. As a result, the alignment was shifted an additional three miles north to its current position, which at the time was sparsely developed.

This was a massive boon for the town of Dublin, Ohio. 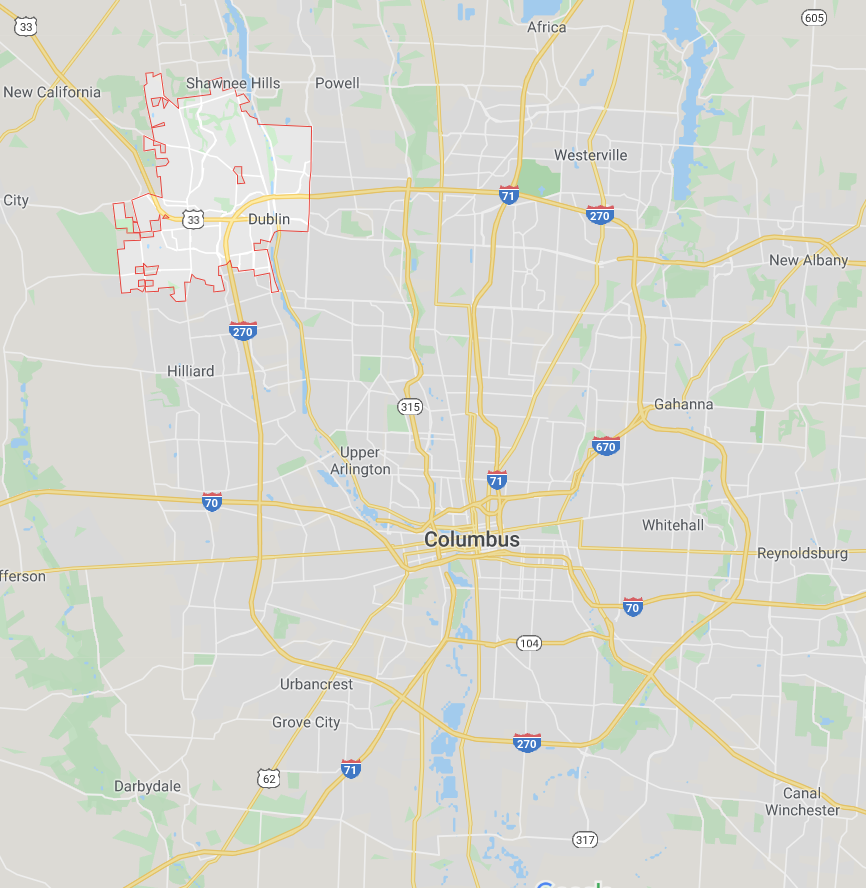 At the 1970 census, just before the relevant section of I-270 was completed, Dublin was a tiny village of 681 people, despite its location at the intersection of US-33 and OH-161. As of 2018, Dublin is estimated to have almost 49,000 people, which would make it one of the 20 largest municipalities in Ohio and possibly the second-largest city, behind Columbus, in all of Central Ohio (Newark is estimated to be a similar size). In addition, one of the four Fortune 500 headquarters in the Columbus area is in Dublin (Cardinal Health), as is the global headquarters for Wendy’s (which is somehow not a Fortune 500 company).

In fact, Dublin and other communities along the northern edge of I-270 are doing so well that towns even further north, such as Delaware, OH, are seeing major expansion; Delaware, despite being over 25 miles from downtown Columbus and the county seat of an entirely different county, has doubled in size between 1990 and 2018 and is now itself home to 40,000 people. Imagine trying to cover a service area this stretched with meaningful bus service, let alone any other kind of transit.

This process was likely accelerated by the building of the Polaris mall complex, which along with fellow I-270 beltway mall Easton Town Center are two of the largest mall complexes in Ohio. Both of these malls were clearly placed with I-270 access in mind. Easton, originally conceived of as an expansion of Limited Brands’ nearby suburban headquarters, led to the creation of a new dedicated exit from I-270 (and because of traffic control issues, the creation of de facto express lanes along what is now a 12-lane stretch in the area). Polaris led to a substantial reconfiguration of its exit off I-71 immediately north of I-270, as the commercial sprawl across I-71 created substantial congestion at the original interchange. The government is now picking up the tab for improvements to the road grid that are being required by the placement of these malls. (A similar project on the west side of Cleveland to provide a local-road link between Crocker Park, a similar mall complex, and points south cost the federal government $13 million.)

As an aside, Polaris was built just north of the Delaware county line, presumably for tax or regulatory reasons, but still close enough to I-270 for theoretical local-road access from the southwest at US-23. This section of US-23, along with the nearby road network, is now so congested due to commuters from places like Delaware and Lewis Center that it is markedly faster, even under good conditions, to loop around on I-270 and I-71 (an extra 2.5 miles) than it is to take local roads directly from places like Worthington.

Recall that Shaker Heights was up in arms over a 67-acre interchange in the middle of their town. By comparison, the I-270 interchange with I-71 is a monstrosity: by a quick estimation from Google Maps, it appears to be between 120 and 150 acres. Indeed, it was recently expanded in order to eliminate a tight cloverleaf ramp from I-270 eastbound to I-71 northbound, allowing drivers to speed even more quickly through the section. As a result, the east-to-south ramp was also moved, adding maybe 20% to the area eaten by the interchange. (The outline of the old cloverleaf ramp is also still visible.) And that space is indeed eaten, with virtually no freeway-to-freeway interchanges containing any usable space anywhere nationwide. The interior of the interchanges are typically cleared of trees, whether for driver visibility or concerns regarding root networks or some other reason. Accessing the interior would require the construction of at least one bridge or tunnel across a ramp (and in most cases, likely more).

But I-270 doesn’t carry just one interchange like this; it carries nine freeway-to-freeway interchanges, each conservatively eating up 100 acres of space. Combined, these nine interchanges therefore take up more space than Central Park, which hosts 38 million annual visitors in just 843 acres.

Plenty of I-270’s other interchanges are also space hogs, but focusing on the interchanges would sell short just how much space the interstate itself takes up. This is the thing about outer freeways: they’re incredibly easy, in most cases, to expand, since adjacent development is typically also low-density. Consider that the downtown approaches in Columbus (I-70, I-71, I-670, and OH-315) are all either six or eight lanes. I-270, for a twelve-mile stretch between Dublin and Gahanna that passes both Polaris and Easton, is a minimum of 10 but more typically 12 lanes wide.

Given federal interstate standards for width, a 12-lane interstate must be 194 feet wide, at minimum. While I-270 is occasionally as narrow as 6 lanes, it includes buffer zones that stretch far past its paved footprint, making 250 feet a closer, but still conservative, estimate for its average width. Therefore, over its 55-mile length, I-270 eats up at least 2.6 square miles, or 1670 acres. For comparison, the entire campus of The Ohio State University, the university with the third-largest enrollment in the United States, is 1665 acres.

None of these things should be out here, miles from the center of the city, encouraging low-density infrastructure in places that were largely empty a couple decades ago. Not the malls, not the corporate offices, not the fulfillment centers, not the low-density residences, not the 12-lane chasms, not the gargantuan interchanges. But from the perspective of suburban communities, they’re a huge success. The services, shops, and jobs that used to be centralized in the urban core are now just a quick drive away, re-centralized where access from suburban neighborhoods, via car, is easy. But this re-centralization is also a decentralization, just another driver of sprawl, one that creates a hulking ring of mini-metros around every urban core that can only be crossed reasonably with a personal 1.5-liter engine and the 3000-pound car frame to match.

The kicker is that since the major two-digit interstates are now mostly set in stone, outer freeways make up the majority of new freeway construction. Many major local roads in outer suburbs continue to be upgraded to signal-free highways, such as Loop 303 in Phoenix or the roads seen in the Minneapolis freeway diagram in Part I. And as beltways and similar roads continue to induce gridlock and sprawl, more and more remote freeways are being built. Consider I-840 “in” Nashville, completed in 2012, which is never within 24 miles of downtown at any point along its route and functions as a 77-mile “bypass” of a 59-mile stretch of I-40. Or “Houston’s” Route 99, which is a third beltway around Houston that is planned to be a minimum of 174 miles (likely ballooning to over 200 if a planned gap is later filled in).

And while these outer freeways didn’t divide neighborhoods the way that urban and intermediate freeways did, they perpetuate segregation indirectly, by ensuring that there is a near-endless supply of outer suburbs that can accommodate white flight. Back in the Cleveland area, Garfield Heights is once again illustrative.

The next town east along I-480, Maple Heights, shows an even more extreme exodus. In 1990, Maple Heights was 84% white and 15% Black. Just 20 years later, in 2010, Maple Heights had completely flipped: it was 28% white and 68% Black. These two towns both shrunk marginally from 1990 to 2010, but nothing that would provide an alternate explanation to these demographic shifts. The white residents of Maple Heights and Garfield Heights decided to move.

But what do outer freeways have to do with this?

Given the location of these two towns on I-480, a worker living in one of them might plausibly work in any number of places, but a likely option is just to the northeast, along I-271, an outer freeway that has seen runaway development in the last 15 years. That stretch of I-271 includes a number of towns with large minority populations, including Bedford Heights, Warrensville Heights, and Woodmere.

But because of I-271 itself, towns like Twinsburg and Macedonia, both 85% white, are only 10 minutes south of most workplaces along the corridor. Ten minutes north along I-271 is Lake County, an entire county that is 95% white. And ten minutes east, along outer freeway US-422, is Geauga County, a county that is 97% white and continuing to grow faster than the overall metro. Somebody considering fleeing Garfield Heights or Maple Heights has plenty of options.

It becomes a vicious cycle, with more developments popping up at the leading edge of outer freeways, providing more destinations for white flight as minorities are pushed out of the city center. These minorities are perpetually shut out of the redevelopment and renewal happening behind them, but the process of decentralizing the labor supply doesn’t work in their favor either, as these jobs are largely in more remote (and whiter) neighborhoods, created for the benefit of the white suburban resident who no longer wishes to drive through the minority neighborhood to work. It only remains to be seen whether these suburban job hubs will follow the same pattern of flight, at least if we can’t break the cycle ourselves first.

But how do we do that?