I. Toledo, Minneapolis, and the Entrenchment of Suburban Freeways

I moved to Toledo with virtually no knowledge of the city, but I’ve been captivated by numerous parts of its history. (Ask me sometime about Turtle Island, one of the smallest islands in the world that is divided between two states/countries.) Toledo’s reputation largely stems, though, from its glassmaking industry. The three biggest companies that emerged out of this era, Libbey, Owens-Illinois, and Owens-Corning (yes, they’re separate companies, and yes, Owens-Corning is not Corning Glass), are all still based in the Toledo area.

Libbey is based right in the center of town, literally one block from my apartment. Owens-Corning has a sprawling campus nearby, and although they vacated another nearby building to hog more land area, they’re still very walkable to all of downtown.

Owens-Illinois was also based downtown for decades, most recently at One SeaGate (known then as the O-I building), the tallest building in Toledo. But in 2006, Owens-Illinois decided to move its corporate headquarters from downtown Toledo to a newly built 100,000 square foot complex at the edge of the metro.

And when I say edge, I do really mean edge. O-I’s complex is behind one of those faux-European outdoor mall/residence hybrids that now exist in the suburbs of most cities, and the southern entrance to the mall literally opens up directly onto farmland.

O-I’s new headquarters are on the outskirts of Perrysburg, Ohio, a town of about 20,000 that is served by zero metro Toledo bus routes despite nearly bordering Toledo directly. (There is call-ahead shuttle service within city limits, but you must reserve your ride at least 24 hours in advance, so it doesn’t feel like mass transit to me.)

So why shun a central location, one where the company had been for decades, in order to move to a new building at the edge of nowhere?

A map answers the question clearly: Interstate 475, the supposed “beltway” around Toledo, is built in such a way that this edge-of-nowhere location is actually convenient to more of the metro than a downtown location. I-475, because of its pinched shape, doesn’t function well as a bypass; instead, development has popped up along its north-south corridor, even in areas where it doesn’t improve access to downtown Toledo. The result is a suburban sprawl ecosystem that can function completely independently of the urban core.

Increasing urbanization is starting to trickle down from the biggest cities in the United States, with Midwestern cities serving as a poster child for urban renaissance as young professionals seek to find affordable living situations. But Toledo hasn’t reached that point yet; the downtown remains relatively empty, even during the day, with abandoned food and retail storefronts that greatly outnumber the ones that remain. And while the prevailing sentiment is that the number of jobs located downtown has somewhat stabilized, it’s unclear what might convince folks who live up and down I-475 to ever come back.

Indeed, if corporate offices are going to relocate to capture suburban workers rather than the other way around, creating more sustainable, more walkable, and more desirable cities will always be an uphill battle.

And in truth, the incentives are there for O-I or any other company to try to capture those suburban workers. By a quick-and-dirty census tract calculation, roughly 200,000 people in Lucas County live up and down that I-475 corridor (2010 census figures), with most communities in that area growing gradually. The total population of the county, by comparison, is 440,000 and falling.

This isn’t just limited to cities that are declining or in stasis, either. Let’s take a look at the Twin Cities, for example, which have always grown at least 8% every decade since St. Paul was founded in 1854. The metro area contains the headquarters for sixteen 2015 Fortune 500 companies. I’ve mapped the locations of the 16 headquarters here, laid over the freeway system in the metro area:

Now here’s that same map, but with only the two-digit interstate highways preserved: 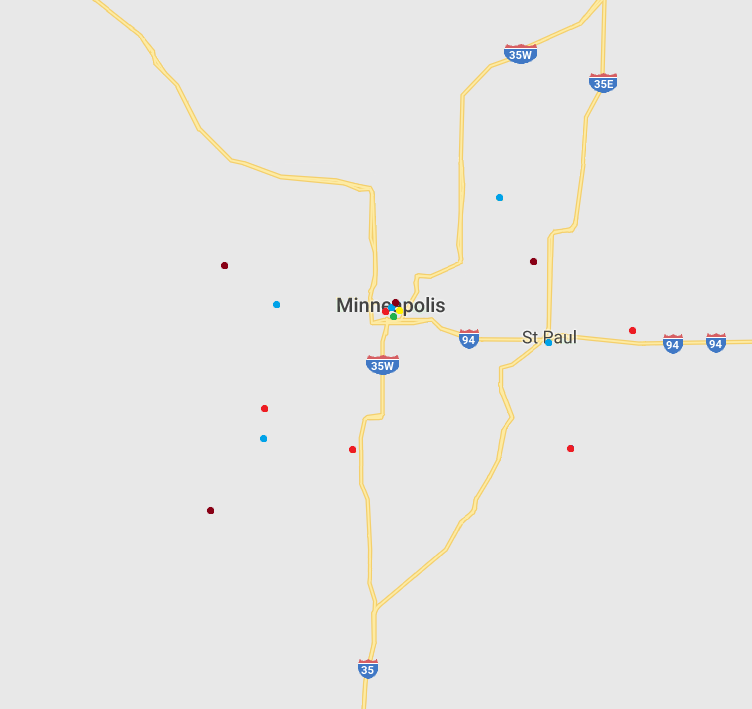 The freeways in the Twin Cities are so fragmented that it doesn’t quite fit, but it doesn’t take much squinting to make an educated guess as to the shape of the beltway around MSP. This distribution would make absolutely no sense if it weren’t for the maze of suburban connectors that run through the MSP suburbs.

I’m not advocating for every corporation ever to only consider urban headquarters, but the point should hopefully be clear: Not only do most American cities go overboard with auxiliary highways, but the distribution of jobs is clearly following suit.

Lest you think, by the way, that this is just white-collar jobs, consider that the two largest private employers in the United States are Walmart (by far) and Amazon. Walmart, of course, primarily places retail and shipping locations in the suburbs, and Amazon’s fulfillment centers follow the same pattern: in the Minneapolis-St. Paul metro, two of the three Amazon fulfillment centers are in Shakopee, at the southern end of the US-169 expressway on the map, and the third is at the northern end of the US-169 expressway. (Three of the other employers in the top ten (DHL, UPS, and FedEx) are also heavily reliant on shipping, and I’ll give you one guess as to where within metro areas their shipping hubs are placed.)

Shipping is perhaps an obvious mirror for commuting patterns. Amazon’s gargantuan new facility in the Cleveland area happens to be on the site of an old mall in the eastern suburbs, at the only intersection of multiple three-digit interstates in all of northern Ohio (and only one of two such intersections in all of Ohio). As we continue to cling to our cars, these three-digit interstates, by forming the backbone of new commercial and industrial corridors centered around the suburbs, are actively undermining their city centers.

As time marches on, we’ve begun to comprehend the destructive nature of freeways in breaking up urban neighborhoods, displacing residents and businesses, and turbocharging the original sin of redlining and segregation. The “wrong side of the tracks” metaphor pales in comparison when a fifty-foot-wide railroad right of way is placed next to an eight-lane monstrosity, required by federal standards to be at least 150 feet across (and often even more to account for medians or shoulders). At its widest point, the 26-lane Katy Freeway (Interstate 10) west of Houston, with frontage road, is more than 0.1 mile across, or a full two-minute trek through an underpass (for an able-bodied person).

And on the flipside, there is a clear consensus that widening freeways simply induces demand, leading to equal gridlock with more cars on the road. From a climate perspective, this is a vicious cycle that needs to be broken as soon as possible, especially given clear indications that demolishing freeways actually does lead to less traffic congestion.

Promisingly, since the demolition of Harbor Drive in Portland, there have been increasing calls to demolish urban freeways. And while the most famous examples of torn-down highways were not entirely voluntary in nature (such as the Embarcadero Freeway and New York City’s West Side Elevated Highway) or simply rerouted (such as the Big Dig in Boston or the Alaskan Way tunnel in Seattle), progress is starting to be made. Highway teardowns are now regular debates in almost every city with a carved-up urban core, and places like Milwaukee, New Haven, and (perhaps most visibly) Rochester have replaced urban freeways with…space. Space to use for parks, for housing, for businesses, for simply anything other than an engine of congestion. More changes seem imminent, and I personally have a long list of freeways that need to go.

But tearing down urban freeways won’t fix the problem by itself; not at the level of entrenchment we see in 2019. Sure, disincentivizing cars in the urban core, especially with improvements in rail and bus service, can change behaviors and lead to better-built cities. But as long as a network of suburban beltways, crosstown expressways, and other high-speed thoroughfares exist, there will be plenty of people who are happy to respond by shifting even more heavily into the suburbs, continuing to drive back and forth everywhere but the center of the city, especially if their job does not tie them to the center of the city. Many people are emotionally reliant on their cars; if they have any excuse to keep driving, most will. A congestion charge for driving into a dense city center can only go so far if there’s plenty of infrastructure to help you drive around rather than through.

Creating sustainable, dense, and livable cities in the United States is going to require confronting the problems and the consequences of suburban expressways. This includes recognizing the full extent of the problems they have caused, the problems that they continue to cause, and the extent to which they have directly maintained the viability of the car industry. A fully viable longterm solution will almost certainly need to contemplate their removal.

In other words, let’s talk about the beltways.