Tonight is the third debate.

“Julián Castro was too aggressive in the first debate. I don’t think he has the temperament to be President.”

“Elizabeth Warren didn’t get emotional enough. I’m not sure I believe that she really cares about these issues.”

“One person I really thought did a good job of staying above the fray was Beto O’Rourke. I might vote for him now.”

“Joe Biden really responded to the other candidates’ attacks well during the second debate. I think he put a lot of the doubts about his candidacy to rest.”

“Kamala Harris really stood out to me as someone who was willing to get into policy details in their plans.”

“Of the people on that second debate stage, Michael Bennet seemed the most presidential.”

If you’ve followed any of the debate coverage, some of these quotes should hopefully seem a little strange to you. But with only one exception, these are all (paraphrased) sentiments from people that I would consider high-information voters, sentiments that were strong enough that the person was willing to express them directly to me.

But, to some extent, this is a feature of the debates, not a bug. By design, we try to mine information from the debates since they are one of the few direct lines to the candidates that we have (at least, those of us who don’t live in New Hampshire, Iowa, South Carolina, or Nevada). And my own sense of debate winners, in some sense, was a comfortable one. It was one that didn’t really require me to fundamentally reassess my understanding of any of my favored candidates, despite the fact that there were major variances in performance between the two sets of debates (and even within debates). And in that way, it mirrors a common but flawed experience that most of us share, one that I think neatly illustrates the pitfalls of the information that we ultimately take away from the debates.

I didn’t intend to spend my twenties applying for every job on the planet, but due to the field that I work in and the frequency with which I’ve moved around, my fate somewhat sealed itself. In the last seven years, I would estimate that I’ve sent around 700 job applications and gone on about fifty interviews. I’ve also been lucky enough to be a part of hiring decisions at three stops along the way, and through these experiences, I’ve come to one conclusion:

Job interviews, for whatever value they hold, serve largely, if not primarily, as an implicit bias minefield.

I don’t mean to say this with any hint of bitterness, but rather to simply state a fact. While I have been negatively affected by certain perceptions at some interviews, I would guess that my own markers of privilege, some of which I may not even recognize, have led to me benefiting from bias more often than not. It’s not difficult, once you realize that these biases are directly affecting hiring decisions, to see it at work if you’re looking for it. (As an aside, it’s difficult to know what to do to minimize the impact of implicit bias; in situations where I’m in the room where decisions are being made, I’ve tried to speak up when I believe it’s affecting somebody’s assessment, but I struggle with what else can and should be done.)

The job interview’s mechanics have obvious parallels to the way presidential primary debates are conducted. The cable-news “political campaign as job interview” metaphor is overplayed in part because of its obviousness. After scrolling through somebody’s Wikipedia page, I mean résumé, you can read their cover letter (campaign website) and writing samples (perhaps stump speeches, but plenty of options) and have a pretty good idea of who you want to support. A lot of the remainder of the process is just feeding into confirmation bias after that point, regardless of whether that confirmation biased is based on valuable information from past performance or something completely irrelevant.

We have twelve scheduled debates in the 2020 primary season. Based on the first two, there is no real indication that the debates will be highly distinguishable from one another. While there may be a town hall or two sprinkled in, it seems that each debate is going to try to cover every big topic, which will result in the same five topics getting 90% of the oxygen.

And yet, we’re still going to have more debates, and the outcome of each debate is going to be different. We’re going to expect that people gain or lose support from a better or worse performance than in previous debates. And perhaps in the aggregate, this might make sense. But how much sense does it make on a debate to debate level?

One of the unusual parts of the interview process for president is that you go through it even if you’ve held the job before. In 2012, Barack Obama did not have to go through the grueling gauntlet of 28 primary debates that he did in 2008, but he did have to have three debates against Mitt Romney. Despite being known as a skilled orator and rhetorical mind, Barack Obama “underperformed” expectations at the first debate. Obama’s standing in the polls, and his 538 chances, plummeted in the first week of October, from about 85% to roughly 60%.

This perhaps made some sense; media coverage after the debate played up the “loss”, and it was hard to avoid a narrative that the Obama campaign was on its heels.

But why? Did we really think that Obama was a different person, with different skills, than he was in 2008? Any potential disappointment over his first-term legislative record should already have been priced in. Why did that three-hour job interview make that much of a difference?

Of course, in the job interview setting, the question is whether the candidate will deliver results, not why or why not. If Obama had had two more poor debates, the trend could have easily continued or accelerated. As it was, though, Obama “won” the remaining two debates and ultimately cruised pretty easily to victory. 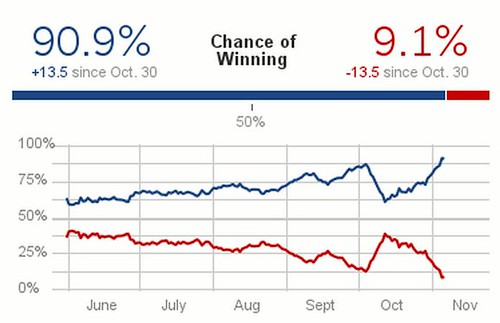 This is not to say that the debates don’t measure anything, of course. But I would argue that the cable-news methods of measuring debate performance don’t really add anything to the conversation. If a candidate qualifies for enough debates, they are going to have a bad one and a good one, regardless of how good or bad they are at what we consider “debate performance”.

What exactly is “debate performance” anyway? While the debates have not changed in procedure in the last 40 years, I’d argue that the substance of the debates has changed significantly. Reading a transcript of the first 1976 debate between Carter and Ford feels like reading Congressional testimony or a working draft of a white paper. Policy specifics still find their way into debates today, but not with the same frequency, and the most memorable moments of intervening debates have almost all been devoid of policy. Plenty of candidates have pursued an affirmative strategy of policy-light debate answers, and it’s clear that such a strategy can be successful. While it’s overly simplistic to point to 1976 as the starting point for this trend, the skills required to run for elected office and to govern once elected have been creeping apart for decades, and it’s unclear if there’s an end in sight.

As the debates wear on, of course, each individual one is less and less likely to affect how we feel about any given candidate, given the ones that have come before. But as the field calcifies and the same folks are on stage each time, the debates are actually going to become more frequent.

This makes some sense, of course. You want to have the most frequent debates right before people actually cast votes. But I’d argue that the Democratic Party’s goals regarding the debates are rather different than ours. They know that once a candidate is onstage, they have no power over their performance in the debate. I think there’s also at least some recognition that people may react in unexpected ways to certain candidates, regardless of any preference (or non-preference) that the party might have.

In this era of 24-hour news, though, the debates are a foolproof method of controlling at least one news cycle (and often several). In some ways, this tracks the party’s decision to have a crapload of primary debates (twenty-eight!) in 2008, when enthusiasm was high and the field was large; substantially fewer debates (six) in 2016, when no substantial challenge was expected, and a larger number of debates (twelve guaranteed so far) in 2020.

And while the actual policy arguments that the debates have encouraged so far are not the policy arguments I want to have, I do think that they at least serve to tether some of us, regardless of our engagement level, to the fact that the point of this vitriolic horse race is to hammer out policy ideas that will actually improve our society. And if that’s our goal, we need to have conversations about those policy arguments and hold candidates accountable for their words and their actions. And while this can often lead to the mud-throwing contests we’ve become accustomed to, we have the power to use the debates to make the case for policy without turning those conversations into candidate loyalty tests.

Perhaps this is all a roundabout justification for my need for messy debate drama. And I know that tonight’s debate is unlikely to change my preference ranking at this point (the past two sets of debates have only made me reassess two candidates, neither of whom was in my top tier to begin with). But while we’re at the mercy of the moderators on substance, it is one of the few places where we can hear how the candidates think about the substance that they’re running on.

It can only help to listen to what they say.