I have a lot of thoughts about Michael Slager’s plea deal regarding the murder of Walter Scott, but I’ll limit myself to two.

First it appears that Slager is only pleading to one count of violating somebody’s civil rights under color of law. Law nerds please feel free to correct me, but it appears the statute in question is 18 U.S.C. § 242, which appears to carry a maximum sentence of life when an “attempt to kill” is involved and a maximum sentence of ten years when a “dangerous weapon” is involved. I’d be surprised if the former were the plan for the plea deal, although some news sources are treating it as a realistic possibility.

If it is indeed the latter (and prosecutors must be willing to recommend a lower sentence in order for this plea deal to make sense), this is still not a conviction that incorporates murder or manslaughter. More charges are being brought against police in recent years as these killings gain more media attention, but exceedingly few, even now, result in actual convictions. And of course, even when they do, you often end up with situations like with Peter Liang, who was convicted of killing Akai Gurley but on the recommendation of the prosecutor was spared prison time. (It is important to note that this plea deal will resolve both the state and the federal cases against Slager and thus sets an immovable ceiling for his punishment.)

I, of course, am not advocating for harsher punishments for Slager. Prisons in this country are a truly dark place and in their current form are needlessly cruel to a person’s body and mind. But this kind of discretion on the part of the prosecutors is very clearly not afforded to all. Slager may indeed use his time well once his punishment is served, whether it be one year or ten. But for others, mostly of the same skin color as his victim, that opportunity is not even possible for another twenty-five, thirty, even fifty years, not to mention the 49,000+ people (roughly 50% Black and 20% Latino) who are serving life sentences without the possibility of parole. (This number does not appear to include people whose sentences are long enough to functionally constitute LWOP.)

Second, the Times included a few infographics about the high-profile officer shootings over the last few years (reproduced below). In many cases, the police departments have settled civil suits for substantial sums of money. 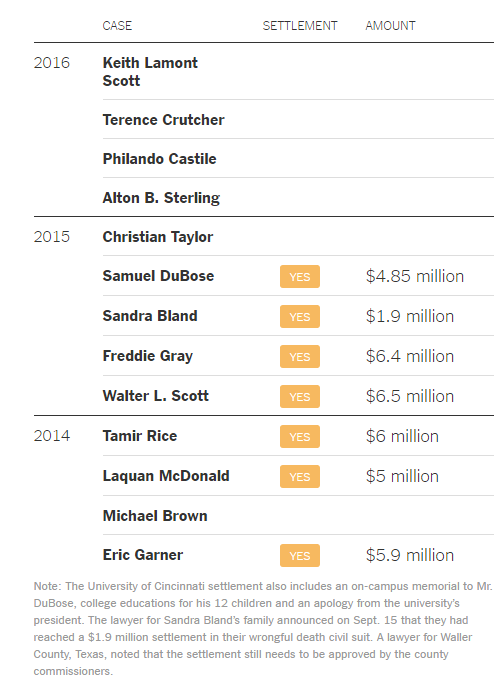 However, the amount in one case appears to be an outlier, and the facts alone do not appear to justify such a large disparity. Black lives matter, and that means we must pay attention when Black women are still getting lost in the shuffle.