This reflection was originally posted on November 9, 2016.

Nearly 22 hours after I arrived at One Pierrepont, the last remaining members of the voter protection team that could not look away from CNN’s objectively fact-averse coverage for hours and hours managed to make it to the front door. As people who had spent much more time together over the past few months commiserated with each other, I ran back into the floor area to snap a picture of something that I saw that had struck me at the beginning of the day, when I had first seen it.

Not that I hadn’t heard it before elsewhere, but it reminded me of this summer, when an intern at my work piggybacked on some pun I was trying out in order to state the same phrase. 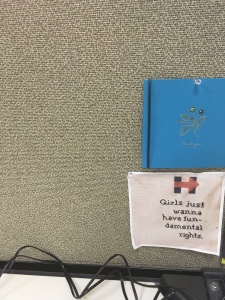 My mind remembered the hope and excitement behind that phrase and wandered to perhaps the least likely part of the phrase: “just”. I’m not really a linguist, but it does appear that the word “just” comes from the same root as the word “justice”. Although it does somewhat twist the meaning, it struck me that on some level, this could be analogized to the obvious conclusion that there was no justice without the possession of fundamental rights.

Sure, these would point to Donald Trump’s limited influence in an ideal world. But they may be even more analogous to the way that Trump, his campaign, and his surrogates have used the word: more as a way to deny fundamental truths of the kind that would create fundamental rights.

Serge Kovaleski? Just a loser with poor motor control. John McCain? Just a guy who couldn’t stay out of enemy hands. Khizr Khan? Just a guy who insisted on doing all the talking for his wife. Hillary Clinton? Just another corrupt Washington politician who had never taken a real stand in her life.

The United States of America? Just a divided-ass country that Obama tore apart at the seams.

And me? Just a minority. Just an LGBT+ person. Just trying to topple the system. Just a loser who works for a pretty insubstantial salary. Just more effeminate than most men.

A United States of America where women cannot be, and have not ever truly been, judged on their merits against men.

And if anybody thinks they can intimidate me out of the flawed country that I was born in, that I was fundamentally shaped by, that I grew up in, and that I have spent the last several years trying desperately to make a little more livable for the most oppressed groups in our society, they would be wrong.

Even as I am a racial minority, I am a nonthreatening one. Even as I am part of the LGBT+ community, I can (and typically do) pass as straight. Even as I work to upend the system, I do it in a field where others can ignore ubiquitous racial undertones and project their own ideal onto my work. Even as my financial situation prevents me from earning more than a set salary, I am sufficiently moneyed to not have to worry about unexpected expenses. Even while not being the most masculine person, I do not have to deal with the regular harassment, disparate treatment, and outright erasure of fundamental rights that women do.

And you had damn well better believe that I am already thinking of how to harness every drop of that privilege to dig in my heels and put in the work. I refuse to leave behind those who have less at their disposal than I do.

I refuse to just abandon my country. Not the country I want, but my country, with all its failings.

I will not yield.